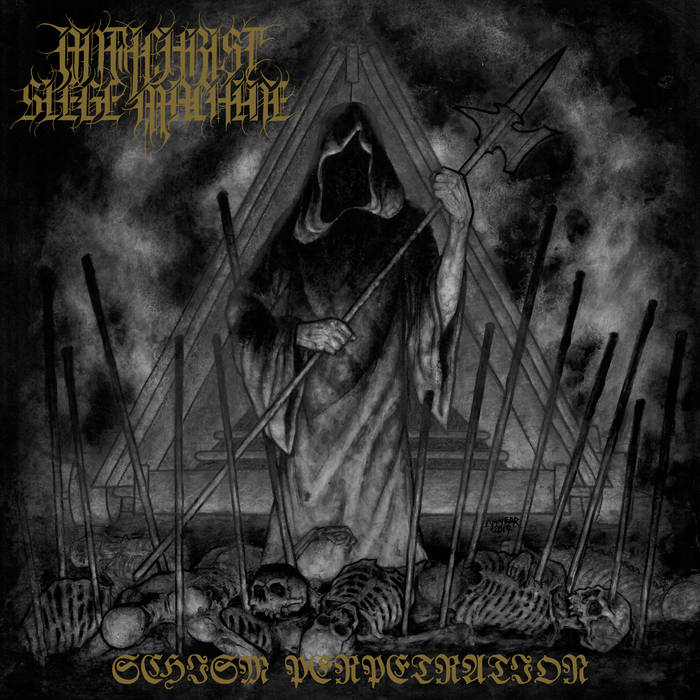 For the past three years, Antichrist Siege Machine has been churning forward, fueled by the hellborne compulsion to demolish everything in its path. From its inception, its trajectory has been aimed at the vulnerable heart of the great schism which weakens all whom it divides. Its campaign is to wage heretical warfare against all those who fear it. After numerous devastating tours across America and domineering demonstrations of its might, Antichrist Siege Machine now deploys its most powerful attack yet: “Schism Perpetration”. This debut full-length features nine unrelenting assaults of warring black/death metal of the highest caliber. Those who already have claimed allegiance to the machine will be pleased at the new levels of intensity displayed on this thunderous album. Those who have not yet felt the overwhelming force of ASM will swiftly submit as they heed its declaration: “Schism Perpetration is the resounding strike against the legions of false allies, forged legacies, and mockeries of true satanic hate. Antichrist Siege Machine bears the banner of godless strength above a battering ram against theocracy and its accomplices. A fatal blow will be dealt to the peddlers of false teachings and their atrocities committed against humanity.”

Infernal hammer blasting drums, chainsaw-on-steel guitars, scolding guttural warcries, cochlea-piercing feedback interludes; two-piece Antichrist Siege Machine (ASM) weilds the full artillery of modern war metal on their debut full-length, and then unleashes it upon listener to force a submission in awe of their craft. Instead of following the tropes and typical structures of their genre, however, ASM displays a keen comprehension for grind, black, and death metal of all eras in their songwriting, the prowess necessary to triumph as one of the leading names in contemporary war metal. Most impressive about ASM is the tremendous sound achieved by these two musicians, dwarfing their peers with an intimidating yet palatable sound and diverse arsenal of compositions. This album is sure to satisfy fans of Bestial Warlust, Conqueror, and Archgoat. Look out for them on their upcoming spring tour, as the duo deliver their payload of crushing war metal to the west coast in April 2020.

Bandcamp Daily  your guide to the world of Bandcamp

Featured sounds by K.Spark and WIZDUMB, plus Basi joins the show to discuss his latest release.